The installer of Linux Mint LMDE 3 (debian edition) of the current lmde3-iso is not able to setup /@ and /@home -sub-volumes.

Installation at btrfs-volumes without sub-volumes does prevent the use of the timeshift btrfs snapshot feature.

The workaround adds the required options to the installer and adjusts the setup to make use of the sub-volumes instead of mounting btrfs volumes straight at / (or /home ).

The workaround will require you to perform a fresh setup of LMDE 3.

As the required modifications are merged to the master-branch since 2019-03-07, there should be no more need to grab an in-official branch of the installer (special thanks to clem@linuxmint for integrating it).

There are still some "bits" missing - like translations of messages - and the final GUI might change with the next lmde-release too.

The password of the user "mint" of the live-system is empty - just press ENTER when being asked for it.

To paste commands to your terminal, either right-click into the terminal and select "paste" from the context-menu, or make the terminal the active window and press SHIFT+CTRL+V .

(copy&paste in terminals require to use SHIFT+CTRL+C and SHIFT+CTRL+V ; as CTRL+C is used there to abort running commands).

Backup any important data. To use sub-volumes on btrfs will require you to reformat the root-filesystem. A dedicated btrfs /home -partition could be reused without formatting, but the original data will be located "outside" the regular file-structure on the running install and require extra steps to move related files to the /@home -sub-volume later. Thus in the following it's assumed the install will replace existing data.

Create a bootable lmde3 media (dvd or usb stick) and boot it.

In case you are not using an us-English keyboard, you should configure your keyboard-layout using Menu->Preferences->Keyboard. Switch to the "layout" section of the shown dialog and add yours there using the "+" button.

Close the dialog and switch the keyboard layout by clicking onto the small country-flag in the panel-tray on the lower-right.

Open a terminal update the current package list and install git to be able to grab the files of the updated installer.

As the original pull-request has been merged to the master-branch in the meantime, the following alternative can be skipped (normally)! BUT - as there might be other (conflicting) merges get added later on, one could try to grab the original modification for btrfs-support explicitly only:

Launch the installer using the desktop-icon. Follow setup-pages until you reach the partitioning section.

Prepare your partitions as needed using the partition-options = re-use existing ones or add partitions for your root-volume and optional for a separate home-volume.

Select the root-partition, right-click onto it and select "Edit" to get access to the additional subvolume-options. Select /@ as mountpoint (instead of / ) from the available selections. Select "format as btrfs" (is obligatory for the root-fs). 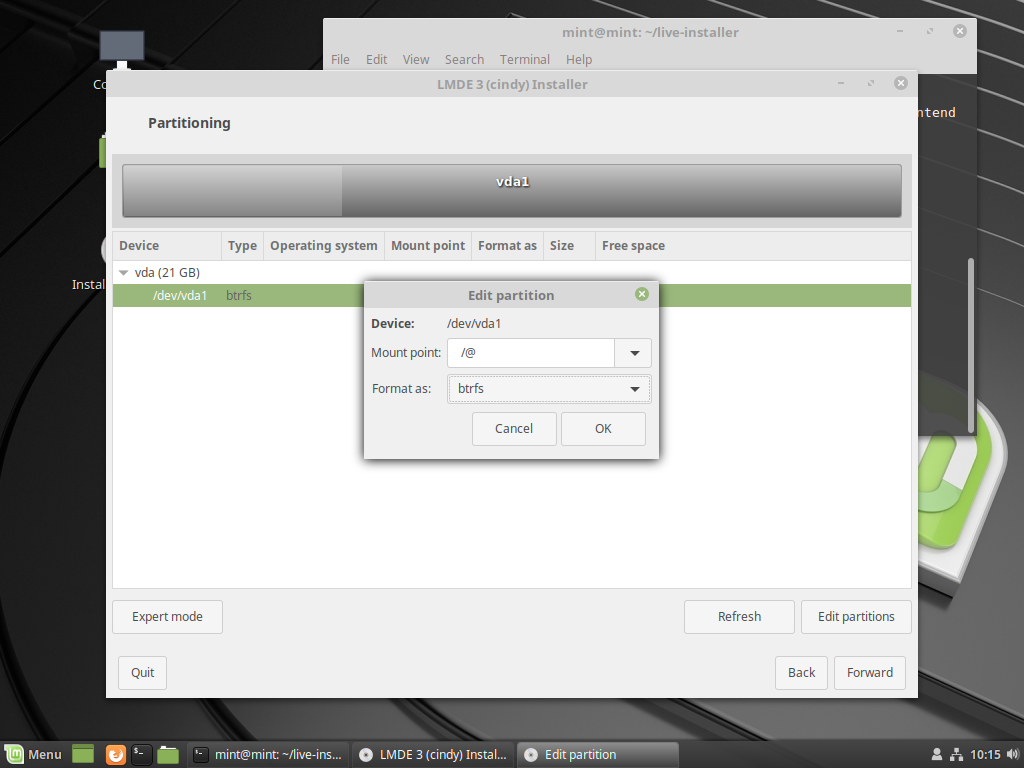 Optional, if you are using a separate btrfs-partition for your home-directory: Select the home-partition and assign it to /@home as mountpoint (instead of /home ) the same way. If the partition is already using btrfs and does contain preexisting data, (which you want to recover later) you could leave the format-option empty (as the format-option is optional for a home-partition).

After assignment of other partitions as needed, continue the setup and finish the install. The installed lmde3 should now offer a working btrfs-option with timeshift.

Due to the nature of a sub-volume, files and folders of a previous install will reside "outside" the /@home sub-volume of the installed/running system .

In case you want to reclaim (or delete) files of a preexisting btrfs home-partition, you should run a live-mint to have easier access to all files.